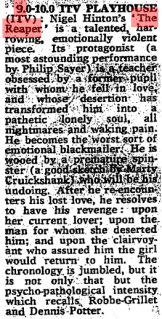 Sometimes you blow the dust off something that leaves you breathless with excitement. Nigel Hinton’s 1979 television play The Reaper has done just that. All I knew of it a few days ago came from this excited preview in The Guardian, published a few days before its sole broadcast as part of the ITV Playhouse strand in 1979. Even allowing for the ephemeral nature of television in the pre-video age, how such a vivid drama has managed to fall into such unjust obscurity is baffling.

The play begins with the clanging of a distant, discordant school orchestra. We are with a detention class, and settle on someone drawing a heart with an arrow through it, only to discover the lovesick doodler is not one of the pupils but their teacher, Nicholas

Nash (the late Philip Sayer). This is a play about the slings and arrows of romantic obsession and rejection, a state of mind which society frequently dismisses playfully but which in fact can, as here, lead to mental collapse and violence.

Nick appears to be neat and clean cut; in fact, he is a tightly coiled spring. He scribbles out another day on the calendar, still waiting for something that is never going to happen. Half-term has arrived and he has no plans. “Come on, Nick, don’t slip back”, says his enthusiastic colleague Val (Marty Cruickshank), a cheerful but lonely soul. He agrees to go to dinner with her, before adding “I’ve always been straight with you. You know how I feel”.

“Yes”, she replies with a brave face.

Nick’s flat is crammed with books, records and posters, but the kitchen is positively squalid. This is a man who once had everything to live for but who stopped caring about life some time ago. An obsession has eclipsed everything. An unsettling montage of eerie images of his ex-girlfriend, Rachel (Judy Monahan) stares blankly back at him, and on the wall are a worrying collection of newspaper cuttings.

He has a nasty dream that he and Rachel are together eating breakfast only for the food to turn into a bowl of maggots. Then he’s woken by a telephone call. Twenty-one months since he last saw her, it is Rachel. We learn that she left Nick for a fellow actor, Joe, but now they have split.

Standing up Val unthinkingly, he meets Rachel at the restaurant which was once their favourite haunt, armed with gifts of books and roses. He is euphoric, forgiving her for their break-up, claiming “it was all a test, and we’ve come through it”.

“There’s not a week goes by I don’t think of you”, she says, lightly. Unfortunately, it’s obvious there’s not an hour goes by Nick doesn’t think of her.

We learn that Rachel was once a pupil at the school, and Nick, a man who now has no future, once taught her history. They had a five-year affair in secret, at the end of which, now established as an actress, she left him. To Rachel it’s all a cute memory, and him once telling her “you are the other half of what I am” amuses her because in recollection it’s so syrupy.

Even though a medium had assured him that Rachel would one day return to him, Nick’s delusions are permanently derailed when Rachel casually mentions that she has a new lover, Pete. Nick has been under the assumption that her contacting him again was because she was honouring the promise she made two years ago, namely that if it didn’t work out with Joe, she would come back to him. But no, she has no memory of that. She has merely called him up to ask for his help with an audition piece. He explodes with rage and confusion, and she flees. He chases her through the drab back streets of Notting Hill, 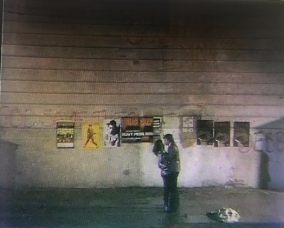 begging her to love him again. At one point, they are filmed in long shot against a vast, shabby wall decorated only by a few pitiful posters and some once meaningful graffiti. Nick’s pain and desperation mutate into sexual jealousy and menace (Sayer really is alarmingly good), slapping her before she manages to escape him.

Nick now begins a murderous campaign of revenge, on Rachel, on the boyfriend who stole her from him, and on the fraudulent medium who has led him to waste two years of his life on a promise of her returning.

It’s at this point that The Reaper could opt to play itself out as a conventional thriller, its currency being jeopardy, its thrust becoming Rachel in danger and its objective being merely to keep us in suspense about whether or not she will survive until the end credits. But instead it does something else, something much more interesting and unsettling. After one further scene, in which Nick breaks into her flat and trashes it after tricking his way past her neighbour (a just-starting-out Art Malik), Rachel disappears from the play altogether. Instead, The Reaper ploughs on relentlessly, not as a thriller but as a character study of a murderer, and one that gets so close to him as to be almost stifling. In the scene when Nick arrives to kill the ludicrous medium Madame Noire (Rosemary Martin), Sayer’s alarming performance reaches the peak of its intensity as the character reaches the depths of depravity and obsession.

The Reaper is a ruthless play not only in its dropping of Rachel when it no longer needs her, but in its picking up of Val again. The reintroduction of the tweedy spinster, stood up but still patiently waiting for Nick to fall in love with her, completes the picture disturbingly. “Whatever’s happened, I’ll be with you,” she claims after seeing his blood-drenched overcoat. She is sick of being “a nice, kind daughter” to an elderly mother she has never spent a night away from until now.

Without giving away the specific details of the final half of the play or its eerie, diminuendo ending, suffice to say there is no dramatic chase and no crowd-pleasing resolution. Nick Lowe’s mournful Endless Sleep plays over the closing credits. The evil that a man has done will never be washed away, from his own mind or from the world around him.

I spoke to Nigel Hinton after watching The Reaper. Despite not having seen the play for 38 years, he recalled that it was an unsolicited script, sent to producer Rob Buckler on the suggestion of mutual friend Peter Prince (at the time giving a good account of himself as a television playwright in works such as the impressively honest single-dad story Early Struggles for Play for Today in 1976.) “The Reaper was partly inspired by my time as an actor”, he told me. “I’d been in a summer rep on the Isle of Wight, and in the company was a lady who was very into astrology and Tarot. I was trying to work out what life was about I suppose, and sat down with her for a reading, but she was so clearly a charlatan, asking leading questions and all that. It got me fiddling around with the idea of someone being given an important prediction by a medium and staking their life on it.

“But it also drew on my memories of being jilted during my teenage years and simultaneously finding myself studying Jacobean revenge plays at school and university. It got me thinking about pain that leads to obsessive behaviour and wild, unreasoning desires to hit out. Unless it becomes pathological, as in the case of someone like Nick, I guess it’s a kind of paradigm of adolescent self-absorption. I remember my hurt teenage-self fantasised about scratching the car that my ex-girlfriend had recently been given by her doting parents. I was kind of shocked by such feelings and, fortunately, I was able to observe them and put them in their place and store them up for creative use later. So certainly, it was the darkness of the psychology of the piece that interested me”.

I too once wrote a play about rejection and obsession leading to violence and psychological collapse, Rainbow Kiss (Royal Court Theatre, 2006). It was inspired by two different people I knew at University, both of whom were driven to dreadful lengths by relationships ending. One attempted violence against their ex-partner, the other committed suicide. Perhaps it was the distant echo in this play of my own take on that familiar yet strangely under-explored theme that has made The Reaper haunt me in the days since I watched it. Nigel continues:

“The director, Marek Kanievska, wanted it toughened up a little; in fact, we did have one blazing row, which he won, insisting that Nick would slap Rachel’s face. I wasn’t convinced Nick would be so wildly violent at that point; I was much more interested in the slow burn, in the psychological”.

Regarding the quiet, bleak ending, he says: “Interestingly, one of the books I wrote for children, Collision Course, which was sort of Crime and Punishment for teenagers, had a similar ending, just fading out, everything internalised, which didn’t satisfy some people; again, there was no real resolution”.

It’s this commendable lack of reassurance that disorientates the viewer. We are used to having everything neatly sewn up on television and film, a world where crimes are cracked in an hour. That tradition can mistakenly fool us into believing that a crime being solved is a crime being resolved. But it never can be so simple. Rehabilitation, restitution, forgiveness, none of those things can change the past. A crime committed against one person may have many victims, all of whom, like the perpetrator, may survive the crime but will probably never forget it.

The Reaper is a skillful, troubling play that I suspect will never quite leave me now, precisely because it ends with a sense that there can be no atonement, no hope, after the awful consequences of a senseless obsession. An arrow through the heart, unlike in that playful, frivolous drawing at the start, can in truth be a lethal wound.

"So many faded old names, broken toys, shattered joys, lost little pieces of truth, had their day, had their say... " (Pieces of Me, Linda Hoyle)